As many investors can attest, 2015 has been a difficult year in which to make money using the standard stock and bond approach. And 2016 isn’t looking much better1.

With the economic expansion entering its eight year and the Federal Reserve (“the Fed”) expected to start raising interest rates, investors and their advisors are becoming concerned that they may be over allocated to stocks and bonds at this juncture. The good news is that there are still pockets of opportunity to diversify a traditional investment portfolio.

The primary U.S. stock, bond, and real estate markets have produced quality returns since the economy came out of recession in 2009. These “beta trades” as they are known, where investors have benefited from the appreciation of the overall asset class, are widely owned. In fact, Beta strategies have out-performed in this market cycle due to the easy-money environment the Fed has maintained. Now, as we embark on an environment of rising rates, this approach may be less productive (i.e. lower returns and/or higher risk going forward) due to inflated valuations.

The Fed has been vocal recently about raising interest rates, saying it’s time to prepare for the economy to kick into a higher gear. Maybe they know something we don’t, but most signs point to a continuation of sluggish growth. For instance, third-quarter GDP was recently revised to an annualized growth rate of 2.1%,2 up a bit from the initial estimate but still well below their target rate.

Investment strategies that have departed from the basic “beta” trade in this economy have generally under-performed. While there are always individual exceptions to this rule, most “alpha” strategies have struggled to generate positive returns. High valuations in stocks and bonds, higher fees in alpha strategies, and sluggish economic growth have frequently been a formula for disappointing returns, and this time has been no exception. 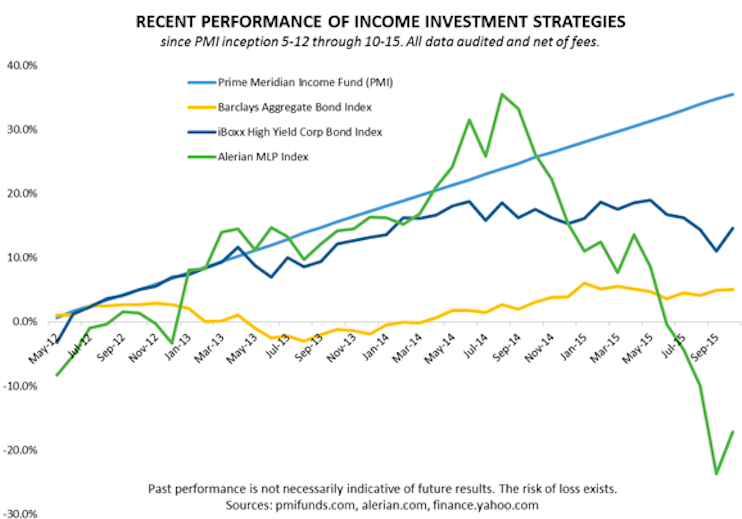 In bonds, arguably the most over-valued asset class today, investors have been using high yield bonds, bank debt and other specialty credit strategies to diversify their holdings. Due primarily to economic weakness being imported from overseas, this has not been a useful approach this year and it may not be going forward if the global economy remains growth-challenged.

Consumer and Small Business Credit as a Portfolio Diversification Component

We believe consumer and small business credit are areas to which investors can prudently turn for portfolio diversification in today’s investment environment. Consumer loans, represented in this case by the highly diversified Prime Meridian Income Fund (PMI), have been consistent performers during periods of market uncertainty, and have resulted in low correlations with traditional investments historically (see chart). This is partly due to the private nature of the loans, and partly due to increasing demand for consistent, transparent, and data-driven credit underwriting used by peer-to-peer (“P2P”) lending platforms. In addition to prime credit quality, P2P loans also have short durations and high current income characteristics that are desirable in a rising interest rate environment.

If you consider yourself an astute investor but are unfamiliar with investing in consumer or small business credit, you aren’t alone.  These credit strategies have been un-accessible parts of the investment spectrum until just recently, when borrowers and lenders began to interact directly with one another through P2P platforms, like Prosper and Lending Club, instead of through traditional banking channels. Now, thanks to technology, investors can access what have been consistently profitable strategies for banks and credit card companies for decades, and in a wide range of economic environments.

Peter Lowden, CFA, is a Managing Director of Prime Meridian Capital Management, an early adopter in the P2P lending space. In this role he oversees the operations and direction of the firm. Mr. Lowden has over 25 years of experience in traditional equity and fixed income securities analysis, traditional and alternative investment manager research, asset allocation, and portfolio management of equity, fixed income, mutual fund, fund of funds and hedge fund strategies. Mr. Lowden holds a Bachelor of Science degree in Finance from the University of Colorado, Boulder, as well as the Chartered Financial Analyst (CFA) designation from the CFA Institute. He is a past President of the CFA Miami Society, and is active in the community where he has helped guide multiple non-profit organizations.