Yesterday the Federal Open Market Committee (FOMC) raised the Fed Funds target rate range by 75 basis points to 1.50%-1.75%, above prior consensus expectations and the largest rate hike since 1994. There was one dissenting vote, Kansas City Fed President Esther George who preferred a 50 basis point increase.

Chairman Powell referenced higher consumer inflation expectations as a driver of the decision to increase the target rate 75 basis points versus 50 basis points. The University of Michigan published an updated survey last week showing consumer inflation expectations increased dramatically in April 2022. According to the survey, respondents anticipated inflation rising 5.4% in the year ahead, the highest since 1981 (see chart below). 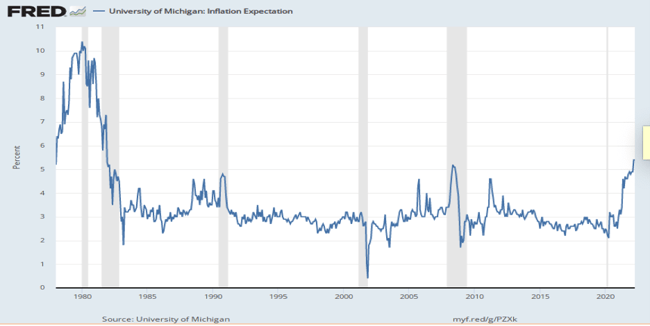 The Federal Reserve’s dot plot, which the US central bank uses to signal its outlook for the path of interest rates, is now more in line with market expectations following the 75 basis point increase. The median dot in the Summary of Economic Projections now shows a Fed Funds rate midpoint of 3.375% at end-2022, up from the 1.875% rate projected at the March meeting. The estimate for the end of 2023 increased to approximately 3.80%, up from the 2.80% at the March meeting. Five members of the FOMC projected a peak rate above 4.00% in 2023 (see chart below).

The Fed also reiterated that it will shrink its balance sheet by $47.5 billion per month, a move that took effect June 1, 2022, and that will increase to $95 billion per month in September 2022. Economists expect that the reduction in the balance sheet will have a similar effect on the economy to an additional 25 – 50 basis point increase in the Fed Funds target rate.

Chairman Powell dismissed the suggestion that the Fed was trying to induce a recession, saying he saw “no sign” of a broader slowdown while assuring Americans that higher rates could be borne. The Fed is calling for a soft landing with a modest uptick in unemployment and modestly slower growth. We will continue to monitor the situation but generally see higher rates as a strong positive for Prime Meridian’s short-duration high yield alternative private credit strategies.